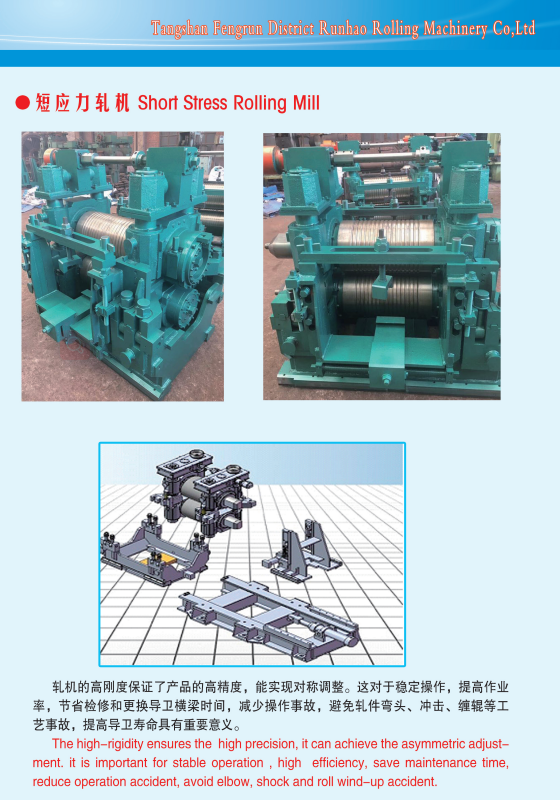 Mechanical structure characteristics of short stress line mill
The short stress line mill is a kind of high stiffness mill, in the rolling process, the internal force caused by rolling force shortens along the stress loop distribution of each bearing part.
The mill is mainly composed of roll system assembly, roll joint adjustment mechanism, axial adjustment mechanism, pull rod assembly and so on.
Roll system assembly
2 with four short cylindrical bearings, the bearing life is long, large carrying capacity, but four short cylindrical bearings can bear radial force, unable to bear axial force, so it is also a double row angular contact ball bearing is used to bear axial force, as a result of the four columns short cylindrical bearing outer ring is free to emerge, so that the circle can be set on the roll neck, outer ring can be within the first load bearing, to push the bearing on the roll neck with inner ring, and roll bearing assembly becomes a bearing itself from the assembly.
It can be seen from the assembly that the bearing and bearing housing are under good stress, and because the rolling mill has eliminated the pressure screw under concentrated load, it adopts four rows of short cylindrical bearing, which makes the bearing bear uniform stress and reduces the stress, so the bearing life is significantly improved compared with the mill.
Axial adjustment mechanism
The mechanism is connected with a universal coupling through a shaft sleeve for external axial adjustment.
The mechanism is easy to adjust and the structural design is new
Ying.
Press down the nut with the spherical gasket
The pressing nut is connected to the housing by a standard screw, that is, the pressing nut cannot rotate with respect to the housing.
When the tie rod rotates, the lower nut drives the bearing seat to rise and fall to realize the adjustment of roll gap.
The pressing nut is under great force in all parts, and it is inconvenient to replace. There is friction between the adjustment and the relative movement of the pull rod screw, so wear resistant materials are selected.
However, compared with the tie rod, the nut material should be slightly inferior to the tie rod material because of its simple manufacture and small volume.
Casting bronze was used for pressing nuts to prevent the extrusion surface from gluing.
The spherical gasket ACTS as a hinge point in conjunction with the pressed nut.
When the pull rod is forced to be aslant due to axial adjustment of bearing housing or installation error, the spherical pad allows a small range of swing of the pull rod to reduce bearing edge load and improve bearing life. The spherical pad should meet the requirements of hardness and surface wear resistance, so 40C rN iM O is selected as the spherical pad material.
5 roll seam adjusting mechanism
The roll gap adjusting mechanism is used to adjust the size of the roll gap.
Because the adjustment stroke is relatively small, and do not need to be adjusted frequently, so the use of manual or hydraulic motor pressure down, the device USES a large transmission ratio of worm gear and worm deceleration, so save effort, compact structure.
Figure 1 as the principle diagram of the roll gap adjustment mechanism, implemented by a set of worm gear and worm drive rod rotation roll gap adjustment, namely four worm wheel engages with a long worm, each worm gear and a lever to roll system key link, the worm shaft is installed on an inner ring gear and gear shaft sleeve two toothed clutch, can press down, at the same time can also be unilateral pressure, selects the tooth profile of spline tooth clutch, the tooth can pass a larger torque and easy for meshing.
After the adjustment of the pressing mechanism, the worm gear and worm transmission mechanism can self-lock.


It can be seen from the roller joint adjusting mechanism that the high precision products are obtained, the rolling waste is reduced, and the mill product yield is increased due to the removal of the pressing screw, further shortening the stress loop, and improving the rigidity of the mill. 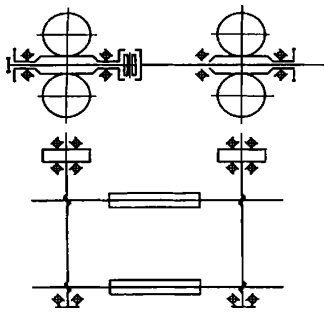 The upper and lower ends of the pull rod are operated by T-shaped screws with opposite rotation, the upper end of the pull rod is matched with the worm gear box, and the lower end is matched with the small base. It is connected with the upper and lower bearing blocks to replace the ordinary mill's gate to bear the rolling force, support the weight of the roller and the pressing mechanism, and participate in the pressing drive to realize symmetrical adjustment.
Therefore, it is required that the pull rod should have high strength, stiffness and good toughness, be able to withstand alternating load and wear resistance, so the pull rod should adopt S34C r2N i2M O.
By adopting this structure, the symmetrical adjustment is realized, and the rolling line is fixed and invariable, so that the adjustment, installation and maintenance of the guide and guard device are very convenient, the operation accident and process accident are reduced, and the yield of finished product and operation rate are increased.
Roll balancing device
Due to the dead weight of the bearing seat and the upper roll, there is a gap between the pull rod screw and the down nut.
If this gap is not eliminated, then the impact will occur in the gap when rolling, affecting the stiffness of the whole frame, so it is necessary to use a balancing device to balance the weight of the upper bearing and the upper roll to eliminate the gap.
Compared with ordinary brand mill, the advantages of short stress line mill are that it shortens the stress loop and improves the rigidity of the mill, thus obtaining high precision products.
Compact design, small size, light weight, simplify assembly, reduce a lot of basic work;
When the roll ring is replaced during rolling, the guide and guard device is kept in its original position and does not need to be updated and moved.
The symmetrically adjusted roll gap ensures the fixed rolling line and thus prolongs the life of the guide and guard device.
(1) The short stress line mill is equipped with more than two sets of rolls. Roll change is to remove the old roll set and replace the new roll set, which requires a lot of spare parts, including rolls, bearing housing, pull rod, worm gear box, worm, etc., which relatively increases the cost.
(2) Due to the heavy force on the pressed nut and inconvenient replacement, in case of damage, the whole set of rolls and worm gear box should be replaced.
(3) The short stress line mill parts of the processing precision is high, the required processing equipment precision is high. 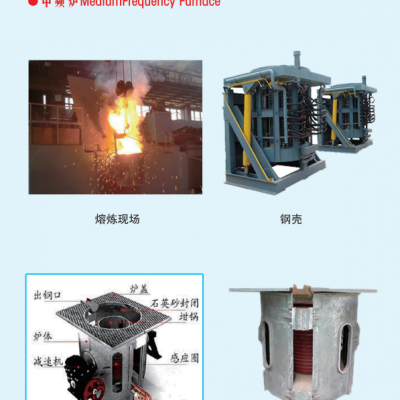 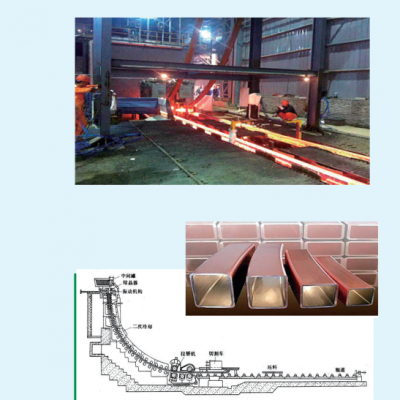 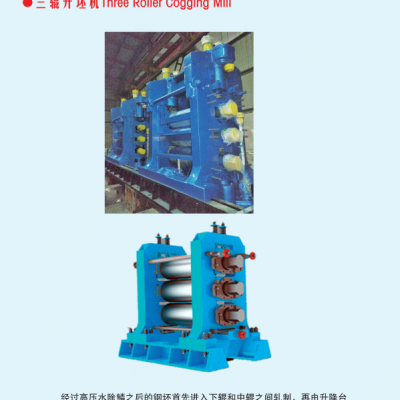 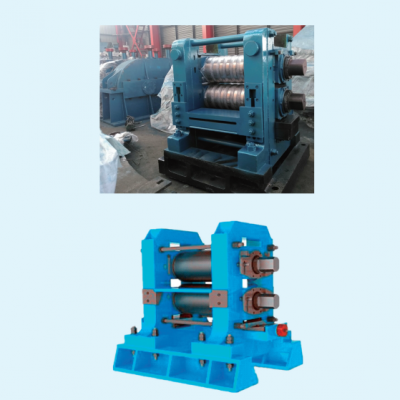 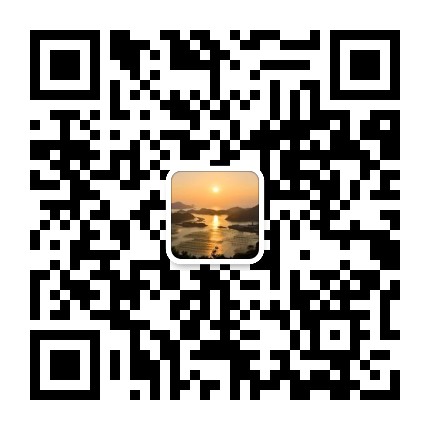